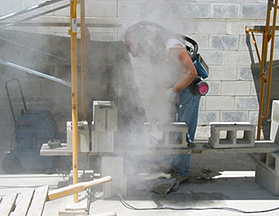 How are industry and business leaders responding to a new proposed rule on crystalline silica?  OSHA claims that the new rule will save approximately 700 lives and prevent 1,600 cases of silicosis each year, but many in the construction industry are concerned that the rule is not economically feasible.

In addition to lowering the exposure limits, the proposed rule includes provisions for the following.

The public comment period for the proposed rule resulted in many comments against the rule, primarily from the construction industry. There were over 400 comments submitted and the opposition focused on the following key points:

In its comments, the U.S. Chamber of Commerce pointed out that silicosis has been on a long-term decline and claimed that OSHA built their proposal for the silica rule based on incorrect assumptions that failed to take into account recent data on mortality and exposure rates.

Health associations such as American Cancer Society and the American Public Health Association endorse the proposed rule with no objections.  The American Society of Safety Engineers is in agreement with lowering exposure limits but also conceded that compliance to the proposed rule is probably not economically feasible.

What’s Next for the OSHA Silica Proposal

Informal public hearings on the rule began March 18 and will run through April 4, 2014.  We will continue to monitor this issue.